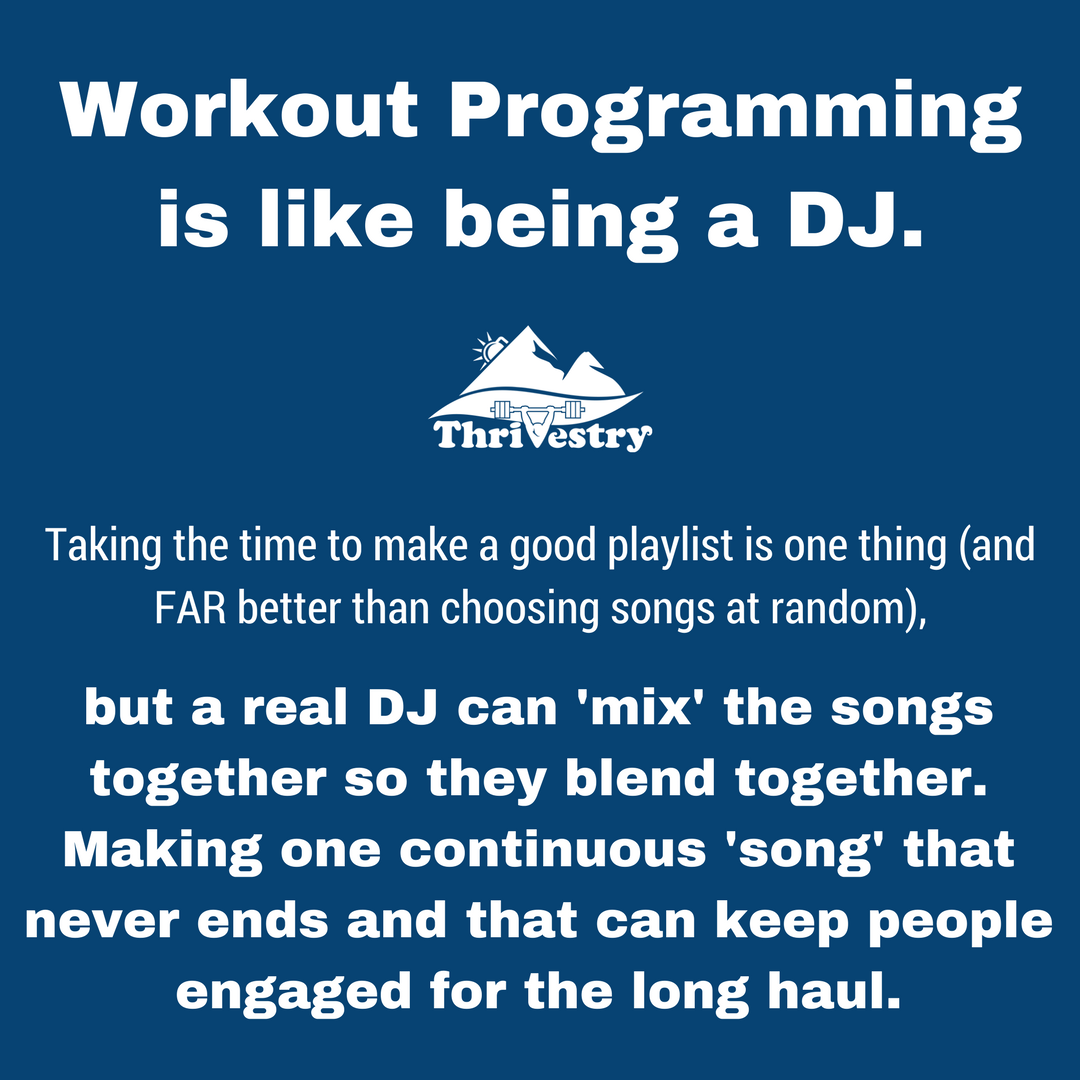 I could talk for HOURS about metcon creation. But the short answer is that, yes there are very deliberate methods to the madness.

The rest of the workouts

Once I know what benchmarks are coming, what week it is in the strength focus, what movements I need to hit, and what ‘season’ we are in, I'll start looking at previous workouts that fit the bill. I have been doing this long enough, to have actually created the exact same workout more than once (and didn't know it until later)!

If I have determined that a previously designed workout won't work for that day, I'll start with some of the elements that I need (duration, movements, etc.) and start filling in additional details.

There are many patterns that work well for intensity and safety.

For example: start with a heavy-ish barbell movement, then going to an intermediate movement or two (like ring dips), then going into something monostructual (like running), and finally followed by a minute rest.

Using this approach we can safely use larger loads, while still grinding out in the middle, and then go for broke at the end of a round, all with relative safety. I probably have about 8-10 patterns (at least) that I use all the time.

My goal is to create workouts that tax as many of the different metabolic pathways simultaneously as much as possible. Even better if we can hit max intensity or failure on each system in the same workout.

For example, a workout with too many strict pull-ups or heavy cleans may lack aerobic intensity because most people must take many breaks before attempting the next rep or set.  I try to create workouts that have people's strength, stamina, and cardio, all failing around the same time.

I also try and make combinations so that one type of person doesn't have a huge advantage. I learned this from many of the CF “Girls”. Fran is not good for a large guy or a skinny guy. Elizabeth punishes both equally. Thrusters and burpees over the bar is definitely a short man's workout compared to thrusters and rowing (which is much more balanced)...

All of that being said, I still make sure we are hitting the different pathways and still specializing in them occasionally!

The best workouts won't make you sore or force undue risk. Soreness is a side effect of training, not the goal. While some soreness will always be a part of training, we can create workouts that get people REALLY stinking fit, without crippling them for days or shredding their hands.

I pride myself on making workouts that may feel like the hardest thing you have ever done (mid-workout), but you can come back a day or two later and hit the gym again.

If we make workouts up that hobble people, tear their hands, destroy their shins, etc., we aren't making people fitter, we are just testing to see who is the most resilient (and possibly stubborn).

It isn't my job to find the fittest people who can survive whatever is thrown at them. It is my job to help people become better humans.

The primary thing I am ALWAYS thinking about when making a workout is safety.

Some Examples: if a workout already has something like ring dips in it, doing burpees might not be the best option because people will either jack their shoulders up or have to slow down to do each movement correctly (not to mention it will make them terribly sore).

Double unders might make sense for a particular workout, but if we did running the day before (and box jumps the day or two before that), the heel cords are already going to be a bit toasty - so why risk the injury?

People must worry about their midline (spine) stabilization when doing overhead squats. If they are breathing hard, it is really difficult to maintain that straight midline. It also gets spicier when doing 15 (a decent amount of reps of OHS). All combined, there is a higher risk of having to bail and possibly tweaking a shoulder or muscle in the back because of the general fatigue.

We also must look at doing the run before the overhead squats (OHS). This forces people to slow down to do the OHS safely, thus reducing intensity. Why not do the run after the OHS? Then people start the OHS when they are fresher each round. People will end with the run, maximizing intensity more safely.

I actually have a version of Nancy called "Fast Nancy" that addresses these issues. It is a 9 min AMRAP (As Many Rounds as Possible) with 15 OHS, then a 200m run.

Side Note: I believe that many running "Girls" like Nancy and Helen probably have the run first because the original gym in Santa Cruz was so small. By having everyone run first, you get everyone out of the gym, making more room for the other movements because the run will separate people. So running first for logistics, not because it is a better workout from a physiological standpoint.

CF Founder Greg Glassman has always stated that the workouts are “seemingly random”. People tend to forget that it actually takes a lot of work to make things seem random, when they actually aren't. It is also why the average person can't see the difference between random programming and planned programming at first glance. It isn't until they experience one, then the other, for months at a time, do they start to feel the difference.

In my opinion, the CFL1 doesn't really teach programming. They briefly go over how to make a decent workout. The weekend seminar doesn't have enough time to cover the details. The CFL2 has a lot more information about how to create a program (albeit it could be better in my biased opinion).

I'll end it with this: creating a workout is like making music.

If the goal is just to fill the time with sound, random noise will work. If the goal is to make something sound good, there are patterns and rules to follow.

Using the CF Girls as an example, we can look at the most popular workouts.

By far, the most popular workouts are Fran, Helen, Annie, and Cindy (closely followed by Jackie, Grace, and Diane). These are the favorites because they have a good combination and 'melody'.

Angie, Nancy, Nicole, Linda, and Lynne, get performed 1/3 to 1/5 as often (according to BTWB), because they aren't the best combinations.

To take it a step further, programming (planning workouts over time) is like being a DJ. Taking the time to make a good playlist is one thing (and FAR better than choosing songs at random), but a real DJ can 'mix' the songs together so they blend and can make one continuous 'song' that never ends and that can keep people engaged for the long haul!

"What Weight Should I Use For the Metcon?" 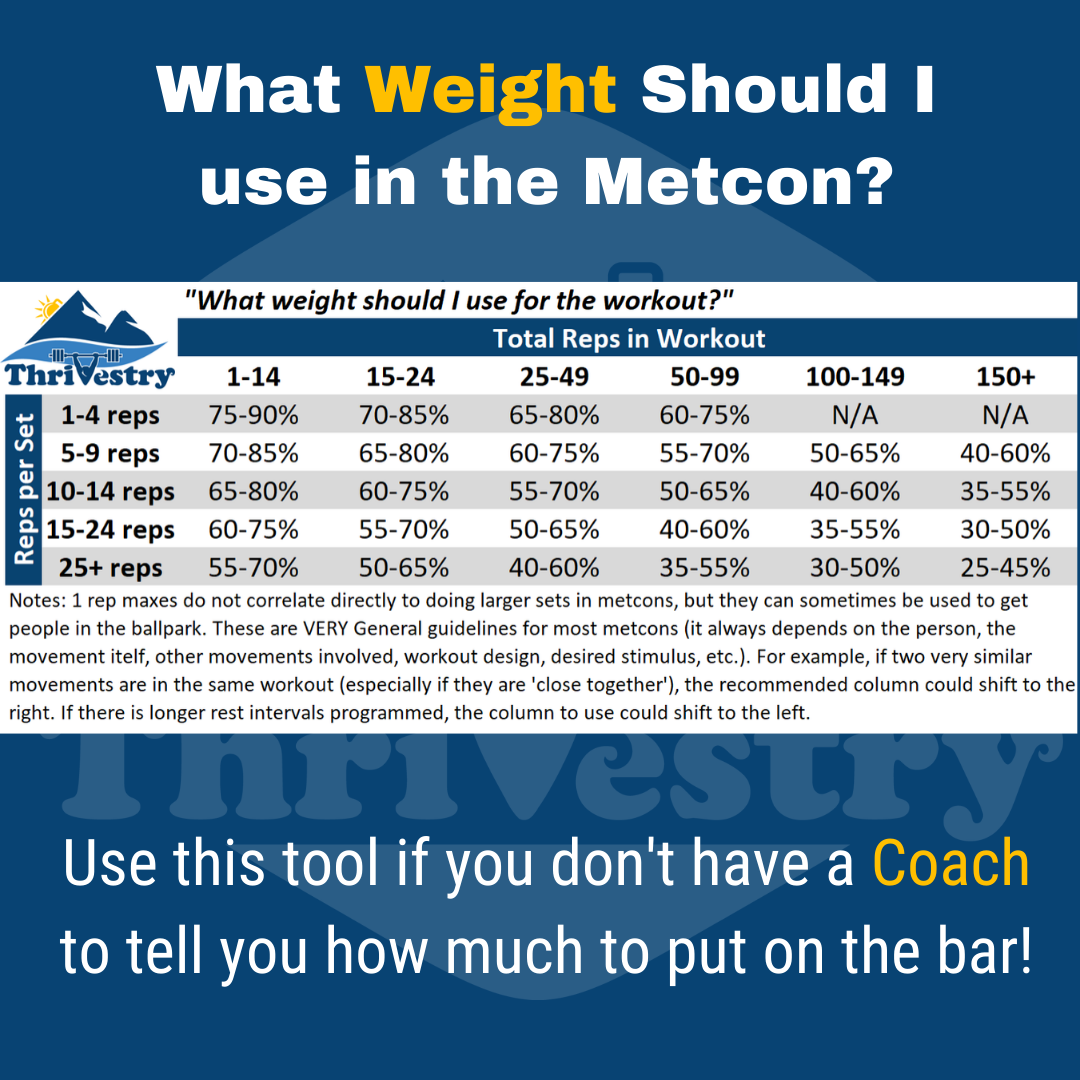 This is a chart to help you determine approximately what weight you should be using on a metcon if you don't have a coach to give you direction (maybe you are working out at home or in open gym) and the workout description is vague on the correct stimulus. Primarily this is designed for barbells (since we usually have an idea of what our 1 rep maxes are, unlike DBs or KBs)

The way it works:

Movement Frequency in Thrivestry Compared to Other CrossFit Programs

It should be obvious by now that I love data and numbers (so you don’t have to), but I’d like to take some time today to break down some numbers ‘behind the curtain’ so you can understand some of the data behind what we are doing, as well as how it is different than many other programs out there.

These thoughts were spurred on by the awesome post by the folks at Beyond the Whiteboard. Head on over there to see what most C…